Burwood Brickworks has its origins in the 1930s when the New Northcote Company needed to replace its clay pit off Separation St. was hemmed in by housing, so the company bought 40 acres of land at Middleborough Road and Burwood Highway in 1937 for £3000. 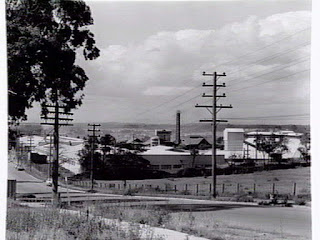 New Northcote initially carted clay from Burwood to its Northcote works. Kilns and plant were erected at Burwood to produce wire cut bricks after World War Two, but problems with the kiln saw it collapse after three firings.
By 1950 four down-draft kilns were operating at Burwood producing 100,000 bricks per week. The company released the 'Nubrik' brand bricks in creams, reds, and tans  from at least 1960. This style of smooth, consistently coloured brick became a preferred material for suburban brick veneer houses throughout Melbourne, but in particularly in the quarter acre blocks of the new eastern suburbs.


In 1959 the company changed its name  from New Northcote to Brick Industries and in 1962 they purchased the Northcote Brick Co. then became Brick & Pipe Industries in 1964. 'Nubrik' and 'Nuface' were adopted as product names for wire cut and then pressed bricks.
Expansion of the works  in the late 1950s and early 1960s saw the first Hanley tunnel kiln  built in 1958-9, greatly increasing production and a second tunnel kiln installed around 1961. Another round of takeovers saw Brick and Pipe Industries become the largest brick manufacturer in Victoria.


The Separation Street plant was closed in 1977 and a new works was opened in Craigieburn to replace it. The last of kilns and chimneys at Northcote were demolished in 1979 and Northcote Plaza opened on the site two years later. The Burwood plant was extensively modernized and expanded, at a cost of $5 million. The Hanley kilns were reconstructed and the wire-cut brickmaking plant was replaces with pressed brick manufacture. In 1978-9 further improvements were made including better kiln firing systems to reduce fuel and automated kiln cars.
Brick & Pipe Industries was acquired by Melbourne Businessman Abe Goldberg 1988 who quickly sold it on as a number of his companies went into receivership in 1990. In the late 1990s, a proposal for a large cinema complex was mooted for the site by Readings Cinemas. However, this did not eventuate. It was around this time that the buildings on site were demolished. In 2003 Brickworks Ltd (including Austral Bricks) gained control of Brick & Pipe Industries after a series of protracted mergers and takeovers.